✓  Adjustable Charging up to 50 Amps

The MaxiCharger Home 50A AC Hardwired EV Charger is a 240V-50 Amp Level 2 Smart Charger compatible with all EV and Hybrid Plug-in vehicles. It features a sleek contemporary design in dark gray and is installable indoors or outdoors.

The MaxiCharger Home 50A offers adjustable charging up to 50 Amps and features a 25ft long Universal (J1772) Charging Cable with side holster and cable management unit.

Find out if you qualify for local incentives.

The 50 amp version made the most sense without limiting charging amps. So much made sense from physical switch to limit amps, wired Ethernet, ability to have more than one per account for the app for a two car home.
The one not so much why I gave this a 4. I could not buy two screw and a clamp for the 14-50 plug if I did not hard-wire from Autel. Nor is the $5 retail parts part of 2 screws & clamp something they sell more is it in the docs from the company. If you have an aces the two screws are 3mm 3/8 ish length. And a 1/2 copper water pipe hanger from Home Depot with a drill bit to make the hole in the correct location.

After researching a couple of other EVSE chargers, I decided I would buy this 50amp (hardwire) charger w/ separate holder. The other charger I was looking at was the CP Home Flex and was about to pull the trigger on it but decided against it because I have read several reviews where people were having issues with the Wi-Fi & Bluetooth components after some time. Typically, those devices don't go bad, but I guess since the CP Home Flex is so compact that it has no room to dissipate the heat from those devices and eventually it fails. I saw a YouTube review of this charger where the guy took the cover off the unit and it looks like it has enough room to breathe, so hopefully this unit will last longer. I bought this unit to charge my BMW X5 45e (which is getting transported from the factory to dealership as of end of Oct) and even though this car can only charge at Level-2 16amps max, I figure I would future proof it for when I decide to go full electric. I installed it myself and it wasn't too bad, the hardest part was to run the thick 6awg wire through the wall. Installed a 50amp breaker and turned down the internal dial to 4 (which is 50amp breaker, 40 amp to the charging port) but again it's the car's internal circuitry that determines the maximum current it can take in and in my case it's 16amps max. I chose the hardwire route because I wanted a cleaner look and that max 50amp rating. Of course, when I do need to go that high, I would need to change out my breaker to higher rated breaker to accommodate the 50amp rating. As far as choosing this unit with a separate holster was because I like the fact that the separate holster can pivot the charging gun downward as to not stick out at 90 degrees like the built-in holster of the other Autel unit. That's one of the other thing I liked about the CP Home Flex was that their holster was built into the unit and it can pivot down to minimize the space in case you have a single car garage or where space is limited. Autel should really revise their built-in holster unit to have a pivoting holster and that will make it so much better. All in all, it seems like a really nice unit. I have powered it on and saw the light come-on but I haven't plugged it into a car yet because it hasn't been delivered yet. I ordered this unit directly from this site and it was delivered in good time, and I didn't get charged tax (which Amazon does) so that's another bonus. 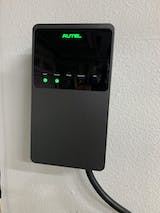 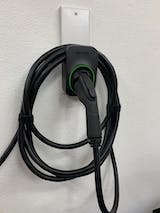 First off. it's packaged like a thermal nuclear device. I highly doubt ANYONE will receive damaged goods .... It's that well packed. Instructions are straight forward, EXCEPT ... I could NOT get my phone to link with the software. After one phone call, I got TWO different reps who worked with me to ... FIX it. AND, they explained ALL the features (in detail) PLUS the upcoming feature that will recognize ALL EV battery manufactures and rate, diagnose and charge accordingly. Although 'my' vehicle can only "take" 32 amps, it's nice to know I have 'spare' amps for future EV's. Folks, this Autel charger does it all. (Except pay for itself) The support staff is nothing but exceptional! Oh yeah, and it LOOKS good too! Ya can't go wrong here ...... Smart Charging from Your Smartphone

Use the Autel Charge App on your Apple or Android mobile device to completely customize your charging experience, including remotely starting and stopping and  scheduling charge. WiFi, Bluetooth, Ethernet, CAN and RS485 connectivity options. Stay up-to-date on the latest EV Charger innovations and product announcements from Autel.